Why your new years resolutions should scare you more than Obama

Any idea why your new years resolutions are more scary than Obama? As of January 1st, 2014 we still have 3 more years of Obama.

More than likely you’ll have MANY more years of your “problems”.  There are no term limits on our issues or our thoughts.

You can’t just wait for your problems to go away with time.  Action needs to be taken.

Obama, whether you like him or hate him, has to follow *some* rules.  We’ve got Constitutional Amendment and laws in the U.S.  Our minds have their own sets of rules and laws.  You can also call these beliefs.  The difference between the laws of the U.S. and the laws of our minds is HUGE.

To create and or change a law in the U.S. (and most other countries) it takes more than one person.  Sometimes up thousands of people.  Bills have to be written, etc.  To create or change a law aka a belief it only takes ONE PERSON.  You know who 😉

I’m going to share a quick story with you.  Its about one of the darkest periods of my life.  This is something I don’t talk about publicly too much.  For years I had severe depression.  I always thought to myself

“Why am I like this?  Why am I so fucking stupid”.  Day in and day out.  Once in a while I’d get a small vacation from these intrusive thoughts.  A bunch of emotional crap had been piling on over the years.

I was socially awkward.  I wasn’t good with girls at all.  I actually thought I was ugly.  Basically I was having a huge ass pity party.  And I didn’t know how to stop partying.

In November of 2001 I had a drunk driving and my depression got way worse. I moved in with a friend of mine.  I had been sleeping in my car for a few weeks after the accident.  I ended up living with my sister.  Actually, I don’t think you could call what I was doing living.

Lying on the couch all day isn’t living.

Shortly after living with my sister for a few months I moved in with my friend Nick.  Even though I still dealt with heavy depression, things started to get on the up and up.  I could start to see a light at the end of the tunnel.  While I was living with my friend I met this pretty cute girl.

I was #ecstatic!  I had a complete 360 in my emotional well being.  We had fun for about 2 months.  Thats until she slept with one of my friends.

Back to the emotional roller coaster.

Not too long after I got so damn depressed.  This was probably way worse than it had ever been.  I didn’t think anyone had loved me.  I remember crying so hard that I started to get physically sick.  If I remember correctly I had puked a few times this one fateful day.

I can remember it clear as day.  It was the summer of my 21st Birthday.  No one could have talked me out of what I was planning on doing.  With a bottle of pills in my hand I was ready to give up on everything.  After sitting there for what seemed like an eternity I started to swallow all of the pills.  One by one.

After I swallowed all of the pills I felt this strange calming sensation.  Its as if my mind finally realized all of my pain was going to go away.  I wouldn’t have to worry about hurting any more or hurting anyone else.

While I was waiting for the pills to do their job a lady was walking past my apartment pushing her child in a stroller.  With the kid looking back at me smiling, I felt a rush of emotions.  Its as if my mind was trying to tell me “Dude, its not your time“.  In an instant I thought about my two younger brothers and how this would affect them.

At this point I admitted myself to the hospital so I could get my stomach pumped.  It wasn’t my time to die.  It took about another 5 plus years to get past my depression.

If you are dealing with severe depression and or suicidal thoughts STOP reading this immediately. Call the National Suicide hotline with the number below. I make a small commission when someone buys a self help hypnosis recording.  I’d rather you be alive than me making a few dollars.

What was my solution?

Self-Hypnosis and a ton of other personal development techniques.  I made a huge mistake of taking years and years to find some good solutions.

Don’t do that!  Take a shortcut.

They’ve crafted these artistic self-help recordings with the end user in mind.

“A 2007 study by Richard Wiseman from the University of Bristol involving 3,000 people showed that 88% of those who set New Year resolutions fail,despite the fact that 52% of the study’s participants were confident of success at the beginning.” 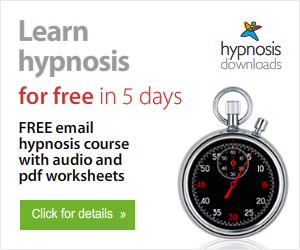